Bulletin
Home > Bulletin > June 2016 > Leading Apia up the Tokelau garden path
Once again the inimitable Seia Mikaele Maiava of Nukunonu, Tokelau is blazing a trail in organic gardening, at the Nukunonu compound in Moamoa, Apia this time. Mika is currently manager of that compound, which can provide accommodation for travelling Tokelauans. On Saturday he hosted the “Informal gardeners” groups of Apia to demonstrate just how much success can be gained by trial & error, persistence and sheer determination. Dressed in traditional Tokelau costume, Mika received about 40 gardening enthusiasts in Apia and led them around the compound. He showed us where he had transformed an unused sports field into a productive taro plantation (for export to Nukunonu). He also used paths and margins to plant productive crops of pineapple, pawpaw, lemongrass and much more.

With the assistance of two Samoan staff, Pelesauma from Luatuanuu and Mila from Savaii, he had also set up a very productive vegetable and herbs garden. This used mostly cuttings obtained from other members of the group (https://www.facebook.com/groups/806887059358983/) which is led by agricultural adviser Seumanutafa Dr Malcolm Hazelman, Mika’s unfailing mentor. Next-door to the garden Mika built an area where the pigs could roam without undoing all the good gardening work, being fed on coconuts and kitchen scraps that were unsuitable for composting. Various secrets to making good compost and fertiliser were shared, such as making fertiliser tea of class clippings and producing compost from fish remains and sawdust (to stop it from being smelly.

The true secret of the production success is keyhole gardening, an African concept to which Mika was introduced by Malcolm. Mika first put this to practice on the infertile coral rock substrate that forms most of the Tokelau atolls, with astonishing results (see previous story).

The keyhole gardening project even features on a recent issue of New Zealand postage stamps. They show the various stages of creating a garden of the right size, putting in the right water-retaining substrate, with the soil surface at the right slope, and a mesh basket in the centre in which kitchen and garden waste is deposited. With regular watering this organic matter will decompose to compost and fertilise the soil in the circle around it so that lush crops can be grown and harvested… and as Mika has demonstrated in his home town Nukunonu, this will even work on a rocky bottom! 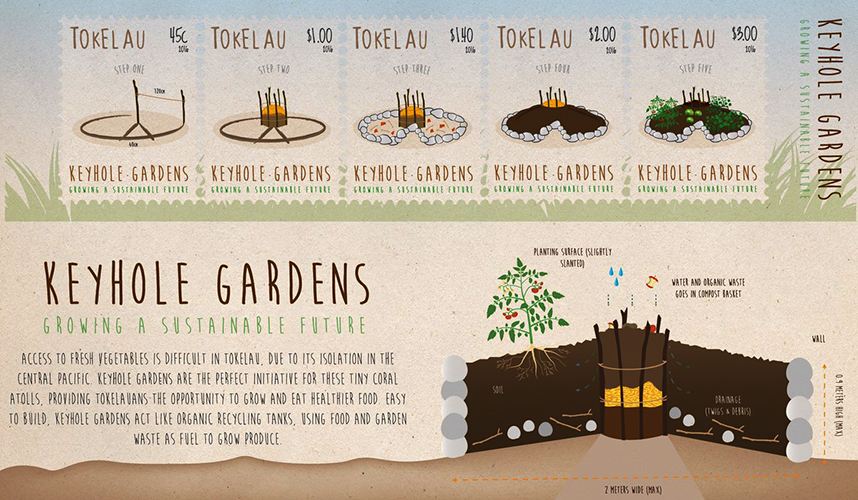 Published verbatim in the Samoa Observer of 22 June 2016, plus a version translated into Samoan