For the 1499 residents of Atafu, Nukunonu and Fakaofo, the only form of transportation between the three atolls; and in and out of their country is via shipping.

“With no air services, we rely solely on shipping for all of our country’s transportation needs”, said Ulu o Tokelau, Hon. Afega Gaualofa who is also the Minister for Transport.

“For all three atolls it is the weakest link in our transport chain in terms of safety, efficiency and reliable scheduling which pose constant risks and uncertainties at many levels for passengers, staff and cargo.

“That is why the start of the Ship to Shore project after so many years of planning and studies mean so much to our people. The upgrade to wharfs and reef channels in the three atolls will make operations safer, improve certainty, resilience and quality of life for our people.”

The project provides more surety and confidence to the Tokelau government in pursuit of its developmental aspirations outlined in the Tokelau National Strategic Plan (NTSP); Tokelau Infrastructure Management Plan; and aligned to the Tokelau/New Zealand Joint Commitment for Development (JCfD).

“This work will increase economic benefits from trade and mobility by improving the safety and reliability of transport for passengers and goods,” added Hon Gaualofa. 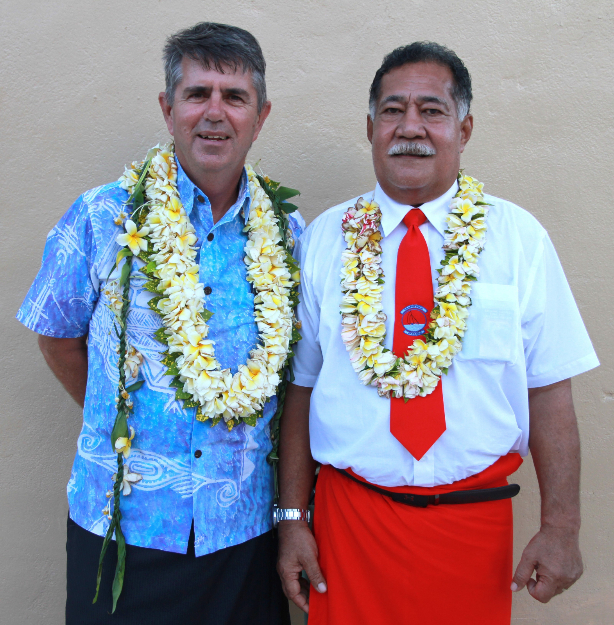 The project, co-funded by Tokelau and New Zealand governments at a cost of $5.5million, will see the channels and wharfs of Atafu, Nukunonu, and Fakaofo’s Fale, and Fenua Fala upgraded in that sequence. It is expected that upgrades to all four wharves and channels will be completed by November 2019.

New Administrator for Tokelau, H.E. Ross Ardern, who had just returned from his first official visit to the three atolls last month was pleased to see the project start under his watch.

“I am very pleased that construction work is about to start in Atafu. I was looking forward to launching the start of works with national and village leaders during my recent visit to Atafu, but weather and other events beyond the control of the Hall Pacific [contractor] set back the schedule.”

Mr Ardern also revealed that “Getting to this point required a business case for upgrading of the wharfs and reef passages to high construction standards to be disaster and climate change resilient; an international tender, approval by the governments of New Zealand and Tokelau of their financial contributions to the project, contract preparation and discussion with the villages on logistics.”

Winning the international tendered contract was Australia’s dredging and civil construction company Hall Pacific. Its winning design proposed that pre-cast concrete panels be manufactured off-shore, and transported to the atolls with all the necessary equipment for their installation. Doing it this way would achieve high-quality and durable concrete finishes that in the end would: In a press statement issued last month, Hall Pacific CEO Mr Cameron Hall detailed some of the work that will be taking place.

“The existing channels afford little protection from swell and are incredibly exposed, so widening and deepening the reef passages will enable ship-to-shore vessels, smaller fishing boats and inter-island vessels to navigate the area more easily and safely.

“The works will provide increased shelter from wave action and have been designed to minimise the need for regular maintenance.

“Our crew will also upgrade the existing wharf and ramp structures on the various atolls as part of our efforts in Tokelau.”

As Hall Pacific embarks on its 18-month contract it is worth having a look back over the years to what Tokelauan citizens and visitors have had to endure during their travels; and note the key and specific areas of work by Hall Pacific aimed at improving Tokelau’s transport chain.

Without air services, Tokelau relies on shipping for all of its transportation needs. There are no harbour or port facilities, and no large vessel access to any of the atoll lagoons.

There is a steep drop off to very deep water at the edge of the fringing reef. Vessels sit in deep water, typically 300 to 400m offshore, with cargo and passengers being transferred to and from shore using small boats. This results in considerable weather and tide related dependency, as well as significant risk in the transfer of both passengers and cargo.

According to Su’a Himona Mei, Tokelau’s Director for Transport, “It has been 20 years since the New Zealand Defence Force (NZDF) created channels for small boats to enter, with more safety, into the lagoons of Atafu Nukunonu and Fakaofo.”

Since those times it soon became noticeable that the channels needed maintenance and upgrade as the depth of water is so shallow in places that navigation during low tide became increasingly difficult. In any given season, rough seas have made it too dangerous to offload passengers and cargo.

Experiences were also logged that even under calm conditions, ship-to-shore operations were cancelled or postponed due to wave conditions in the channels. Some of those delays resulted in serious consequences for some passengers, including those needing urgent medical assistance.

Each atoll has a concrete wharf at the landward edge of the reef channel, which were constructed the same time as the reef channels. Wharf facilities, generally, are in a poor state, and with the wharf areas relatively small, were not constructed to facilitate mechanical offloading of cargo from the barges. Offloading cargo by hand is labour-intensive, time-consuming and increases the risk of accidents.

The lack of landing facilities also makes the unloading of fuel and chemical drums both hazardous and dangerous.

When the preliminary design report was tabled, it identified rehabilitation of existing infrastructure as the most cost effective and environmentally safe option. There was no comprehensive review of abandoning the current infrastructure to build new wharfs and wider reef channels, because those options would not be feasible as they would be too risky environmentally and too costly.

The report instead recommended simple technical solutions that could be constructed using existing equipment on each island, and use of the local workforce under experienced construction supervision. However, the preferred option identified during the ‘detailed design’, and approved, was to tender the work internationally.

Although NZDF assistance was considered for the upgrades work “we were advised that the NZDF does not have the necessary capability to deliver the scale of work identified on the three atolls,” according to a paper by the Department of Transport.

The tender process searched for a contractor that would be able to deliver high-quality and durable concrete finishes. And be able to deliver on the ‘detailed design report’ proposal that pre-cast concrete panels would be manufactured off-shore, and transported to the atolls by the contractor with all the necessary equipment for their installation.

It is now history that Hall Pacific won the tender. A Sunshine Coast company that has been servicing the Pacific Islands for more than 10 years specializing in climate change adaptation and resilience including land reclamation, coastal protection, flood mitigation dredging, and infrastructure delivery.

“Some of the works we have delivered in the past include the repair of a storm breach and filling of ‘borrow pits’ on Tuvalu’s Funafuti atoll, as well as construction of a seawall on the Nukufetau atoll, which assists in protecting locals from the impacts of climate change,” according to Mr Hall.

Hall Pacific’s work in Tokelau will be staged over 18-months. First is the wharf at Atafu, closely followed by the second on Nukunonu later in 2018. The remaining two wharves will be constructed on Fakaofo’s Fale and Fenua Fala in 2019.

Tokelau is a non-self-governing territory of New Zealand. It is located in the Pacific Ocean north of Samoa and south of the Equator (9 00 S, 172 00 W). It is only accessible by boat, taking an estimated 28hours to reach the closest atoll, Fakaofo, a further three hours to Nukunonu, and another six hours to Atafu.
It is made up of the three small atolls named above, separated from each other by high seas. The total land area is approximately 12 km². The total sea area of the exclusive economic zone is approximately 518,000 km². The height above sea level is between 3-5 meters, the maximum width is 200 meters. Tokelau is therefore particularly vulnerable to natural disasters and impacts of climate change such as sea-level rise.
The people of Tokelau are New Zealand citizens. Their relationship hailed by the United Nations as a model for other territories and administering countries to follow.
The population of 1499 (2016 census) is spread approximately equally among the three atolls (Atafu (541); Fakaofo (506) and Nukunonu (452). The traditional lifestyle was subsistence but Tokelau has moved to a cash economy. The only natural resource of any current economic significance is the fishery of the exclusive economic zone.
Tokelau has no main town; each island has its own administrative centre, hospital, school and basic infrastructure. There are no airstrips or harbours. Access is by ship only, through the Port of Apia, Samoa.
There are approximately 7000 Tokelauans living in New Zealand, and smaller communities live in Australia, American Samoa, Samoa, Rapa Nui, and Hawaii.