Bulletin
Home > Bulletin > November 2015 > Tokelau imports of foods, alcohol, cigarettes and fuel from Samoa
In 2015, the Tokelau National Statistics Office completed a study that analysed imports during 2014 into Tokelau by the co-operative and bulk stores (of which there is one on each atoll). The report provides a fascinating insight into consumption patters of the inhabitants of the atolls Atafu, Nukunonu and Fakaofo in 2014.
The contents of the report were released for general use by the Council, at a meeting in November 2015. Aggregate data for Tokelau are presented, while atoll-specific data are confidential to taupulega (village councils) to preserve the anonymity of the villagers.

The abstract follows below the pictures; the full paper minus some appendices is attached as pdf file:

Shipping goods from Apia, Samoa on the PV Matua and offloading into a barge at Nukunonu (2014/15)


ABSTRACT: This project analyses for the first time the invoices incurred in 2014 by the Tokelau co-operative and bulk stores. Each Tokelau atoll has only one of these stores: in Atafu, Nukunonu and Fakaofo. The initial aim was to get an idea of the volume of financial transactions between Tokelau and Samoa. Initial analysis of the detailed stores data showed imports from Samoa by the combined Tokelau stores amount to an average of NZ$432,000 per month, or NZ$5.2 million per annum.

Individual purchased items were coded using the international Classification of Individual Consumption According to Purpose (COICOP ). A national list had been developed simultaneously for the Household and Expenditure Survey (HIES) that is currently taking place for the first time in Tokelau. Groups of commodities could be summarised, nett volumes and weights calculated, and characteristics of the Tokelauans’ purchasing behaviour commented on.

Fuel purchased by the stores is discussed in relation to specific atoll needs and policies.

Some foodstuffs are paid attention to in relation to diet, and the top food imports are ranked.

Major areas of concern are the purchases of cigarettes and alcoholic drinks in relation to the known population aged 15 years and over. The observed consumption is explained in relation to different Taupulega (village council) policies.

Finally, products and packaging with an environmental concern in the Pacific are quantified.

Tokelau presents a unique situation in that most purchases go through the one co-op or single bulk store on each atoll. However, the figures presented do not capture the full basket of goods and services consumed. For example, there is no record in the invoices of trading in clothes, bread, and fresh fruit. Also missing are larger articles such as fridge-freezers and motor vehicles. These items tend to be parallel-imported directly by the villagers and do not feature in local stores’ data.

Suggestions for further development of this analysis are given. Justification for repeating the analysis in 2016 is provided. The work contributes towards the development of regular International Merchandise Trade Statistics (IMTS) for Tokelau, which to date have been unavailable. 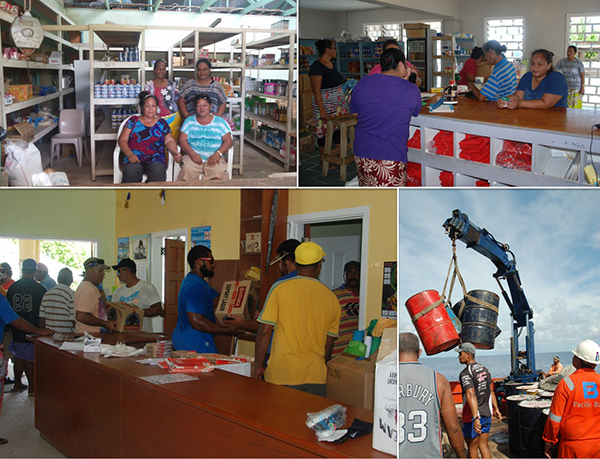