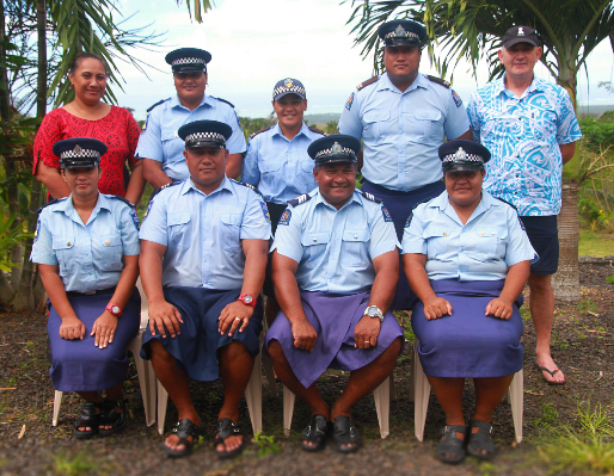 Communities on the three atolls of Atafu, Fakaofo, and Nukunonu have been demanding better policing services for a number of years.

On Monday this week, in the secluded hills of the Tokelau Congregational Christian Church (EFKT) complex at Aleisa, Apia, a specifically tailored training course to boost Police competency, knowledge and capability was officially opened.

Funded by the Tokelau government, it is the culmination of two years of negotiations and preparations by Tokelau’s Police Coordinator, Mrs Lise Suveinakama with the help of New Zealand’s Police Advisor to Tokelau, Mr Murray Lewis .who previously worked for Tokelau Police during Phase 1 of the New Zealand Police 3P Programme (3P)* that ended inended in December 2016.

The ‘Core Skills and Competencies for Tokelau Police Officers’ course is tailored specifically to meet the police services called for by Tokelau’s three villages.

The training which formally started yesterday with the flag raising ceremony aims to empower the four new recruits with basic policing knowledge and tools; and senior officers with the capability to be certified trainers so they can deliver the training in Tokelau, in the Gagana Tokelau; as well as the ability to adapt the course to new situations as they arise.

“To improve police service delivery in Tokelau we needed to address the issue of capacity,” Mrs Suveinakama said in her opening address.
“Some of our police have been appointed without any police qualification or even experience. When that is added to our people demanding better quality service from the police, we needed to find a way to equip and get them to a level where they can really deliver quality policing in Tokelau. This training course is our government’s response to that call.”

According to Mrs Suveinakama, the course from the outset was designed with the goal to not only address capacity and improve competency to achieve better service delivery; but that it also included a ‘sustainability’ component.

“We are not only training them to become better police; we are also training them to be police trainers so in the future, hopefully starting next year, they will run the course in their respective villages. The aim is that in the future, Tokelau police will run the training course themselves thereby making it sustainable as they will no longer need to rely on outside trainers and their availability. It is one of the reasons why this training is a major achievement.”

The more knowledgeable and skilled they become, the more they will see breaches of the laws. And now, with this course behind them, they will be empowered and better equipped with the tools and processes to gather evidence and present well-researched cases to prosecute suspects and offenders added Mrs Suveinakama.

Delivering the training at the EFKT complex is highly regarded former Police Inspector and Tauranga Area Commander, Murray Lewis who is no stranger to the Pacific region. In 2013, he was made a member of the New Zealand Order of Merit for a 40-year police career that included postings to the Solomon Islands, Timor Leste (East Timor) and Bougainville.

In response to counterpart Mrs Suveinakama’s call for a more relevant training course with clear outcomes, together with findings from an independent ‘Review of Tokelau Police, 2015’ by Dr Michael Roguski and Natalie Gregory that highlighted how resources and training might be targeted.

Armed with award-winning 40-years of policing experience Mr Lewis visited the three atolls to see and hear the needs of the communities and the police. He engaged with the communities on a number of fronts where he was able to promote the values and overarching scope of the police sector and its service to protect communities and citizens. It also opened up recruitment opportunities by inspiring young men and women to take up a career in the police [Mr Lewis was also New Zealand Police’s national co-ordinator in charge of recruiting during his active career].

But more importantly, he was able to gain an insight and better understanding of Tokelau’s unique situation and local perspectives from which to distil and align the course content so that it is relevant to Tokelau, and better address the gaps and shortcomings identified.

“I have been very fortunate to have been to all three atolls a number of times. I have been able to look at the police closely and look out for where the gaps are in the knowledge and what is needed. This course directly addresses those areas.”

One of the gaps identified is basic policing skill: how to conduct a crime investigation.

“In one of my visits [to Tokelau] the district office was broken into. They weren’t really sure on how to go about investigating that. Where should they start?”

The course therefore outlines basic “initial action at the scene of a crime” as well as procedures on “interviewing, how to take a statement, dealing with young offenders, and so forth.”

The course is tailored to “Police officers that have little or no experience,” he added. “A basic policing skills course at a low to moderate level. A course for someone joining the police with no training – so it’s a ‘what to do’ course that teach them the basics in how to become a good police officer.”

At the same time the course content has been broadened purposely to cover other parts of the national public service said Mr Lewis.
“For example, module-1 relates to national issues around the constitution, the Tokelau Act, these national issues are ones that all good public servants should be aware of, not just the police.

Module-2 on legislation details Tokelau’s legislation and laws; while Module-3 focuses on basic police skills: how to be a good police man, how to use a notebook, how to speak to someone, how to interview someone, “so each module can be used in different areas if Tokelau wanted to do that,” he said.

It is this woven work and product that Mr Lewis is now delivering at the EFKT Aleisa compound.

A product that will go a long way to overcome Tokelau’s main challenge to police work which is ‘remoteness and isolation. As well as lack of experience in crime scene and preventive police work.

“Some of the things Tokelauan police do very well is community engagement, the school visits, the elderly visits, the hospital visits, the foot patrols, that is already ingrained in Tokelau’s culture so they are naturally good at that sort of thing.

“What they are not good at is how to go about a crime scene and investigating that crime.” Module-3 of the course addresses this gap.

But crime solving is only part of gamut of services and responsibilities for police.

“There is a lot more to being police officers other than solving crimes. Policemen and women are role models in their communities. They are looked-up to by young kids in particular and that’s why we started the school visit program because I wanted the kids of Tokelau to look at their policewomen and men and say, ‘I want to grow up to be like them’.

“There is a whole lot, lot more to being a police officer in Tokelau, well beyond investigating crimes and apprehending perpetrators.”
There is a common bond to Mr Lewis’ approach and commitment to Tokelau police.

“Tokelau citizens are New Zealand citizens, that’s where it starts and ends. They have all the rights and privileges of New Zealand and New Zealand has an obligation to Tokelau. It’s a simple fact that having Police advisors come from time to time, I think, shows New Zealand takes its responsibility to Tokelau seriously.”

But there is also a deeper connection beyond the common and legal New Zealand citizenship Mr Lewis and his Tokelau compatriots share. It is their ancestral/spiritual bond through his Ngai Tahu ancestors with the ancient Polynesian voyagers from Atafu, Fakaofo, and Nukunonu that Mr Lewis feels a special kinship.

“I know each and every one of them [participants], and I am extremely proud of my time and work with Tokelau. But the highlight for me is the wonderful people of Tokelau I have met,” he smiled.

“I am very privileged to work closely with Lise [Mrs Suveinakama]. From Mitimiti in the office through to the general managers, through to the police staff, they have all treated me with the utmost of kindness and respect and I certainly value my association with Tokelau’s highly.”

It is this relationship, developed over the past two years that a customized training course is now in place is set to help Tokelau’s policemen and women with their daily work, and respond to their communities’ call for improved police service delivery.

The training highlights the The ongoing support from the three Taupulega and the Council for the Ongoing Government of Tokelau by endorsing the police recruits’ course in July 2016, which has paved the way to enable the delivery of the first ever Tokelau Police Recruits Course specifically for Tokelau Police. This was one of the achieved outcomes for Tokelau Police under Phase 1 of the New Zealand Police 3P Programme.[LS1]

Mrs Suveinakama paid special acknowledgement to the support provided by the Government of Samoa through the Samoa Police, “for the years that Tokelau Sergeants and Constables received their formal police training from the Samoa Police Recruits Course”.

TOKELAU POLICE BY THE NUMBERS

With the goal of ‘Safer and more secure communities in the Pacific Island countries’, 3P aimed to develop the capacity of the seven Pacific police services.

Tokelau is a non-self-governing territory of New Zealand. It is located in the Pacific Ocean north of Samoa and south of the Equator (9 00 S, 172 00 W). It is only accessible by boat, taking an estimated 28hours to reach the closest atoll, Fakaofo, a further three hours to Nukunonu, and another six hours to Atafu.

It is made up of the three small atolls named above, separated from each other by high seas. The total land area is approximately 12 km². The total sea area of the exclusive economic zone is approximately 518,000 km². The height above sea level is between 3-5 meters, the maximum width is 200 meters. Tokelau is therefore particularly vulnerable to natural disasters and impacts of climate change such as sea-level rise.

The people of Tokelau are New Zealand citizens. Their relationship hailed by the United Nations as a model for other territories and administering countries to follow.

The population of 1499 (2016 census) is spread approximately equally among the three atolls (Atafu (541); Fakaofo (506) and Nukunonu (452). The traditional lifestyle was subsistence but Tokelau has moved to a cash economy. The only natural resource of any current economic significance is the fishery of the exclusive economic zone.

Tokelau has no main town; each island has its own administrative centre, hospital, school and basic infrastructure. There are no airstrips or harbours. Access is by ship only, through the Port of Apia, Samoa.