Starting from the second quarter of 2017, the Tokelau National Statistics Office (TNSO) has switched to calculating its quarterly Consumer Price Index (CPI) series on the basis of an updated set of weights and basket of representative goods and services. The new CPI series is chain-linked to the old series in order to create long-time series. The publication of the CPI will therefore continue uninterrupted, with price index reference quarter June 2012 = 1.000.

Background
The CPI is based on price information collected mostly at Tokelauan stores selling consumer goods, and Government departments providing services. This information is used to monitor the price changes for a wide variety of goods and services, chosen to be a representative “basket” of overall consumption expenditures by Tokelauan households.

The CPI is calculated as the weighted average of the price changes of the individual products and services.  The weights used for this calculation are the relative shares of expenditure on individual products during the so-called base period. Because these relative shares change over time, the base period and weights must be regularly updated so that the CPI continues to accurately reflect current consumer expenditure patterns.

Revision of the base period also present an opportunity to implement improvements to the index, which cannot be implemented in an ongoing series. These include changes to the methodology, the inclusion of new product groups, and changes to the classification.

Key changes in the new CPI series
Starting from the second quarter of 2017, the CPI series is calculated on the basis of an updated set of weights and basket of representative goods and services. The new CPI series is chain-linked to the old series in order to create long-time series. The publication of the CPI will therefore continue uninterrupted, with price index reference quarter June 2012 = 1.000.

The weights for the new series reflect the Tokelau consumer expenditure pattern in 2015/16 and are based on the Household Income and Expenditure Survey (HIES) taken then. This is a significant update from the old series, for which the weights were based on expenditure estimates from 2012.

The graph below shows the changes in the weights for the most important product groups. By far the biggest change is the drop of 8% points in the Food and non-alcoholic beverages. This is in line with other Pacific Islands, where economic growth has raised incomes for many households above subsistence levels, allowing for expenditure on product groups other than food and beverages. With a weight of 33.7% it still remains the largest division by far, followed by Alcoholic beverages and tobacco. While the weighting for tobacco remains practically the same, for alcoholic beverages it almost doubled. So future price changes in the cost of beer and spirits will affect the CPI more strongly. 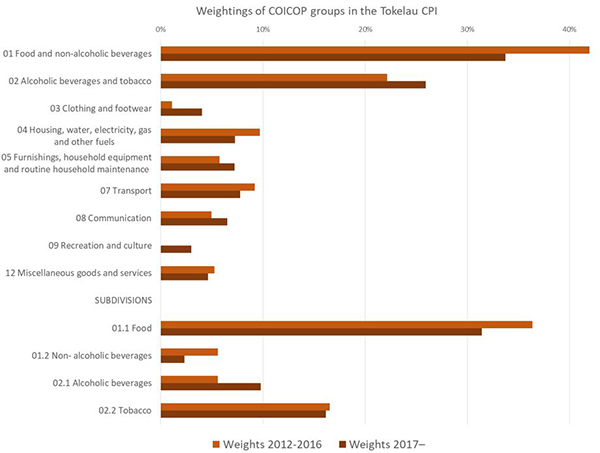 The new CPI series includes some important products that were previously not covered by the CPI. In particular, the basket of goods and services has been updated to include representative items for purchased clothing and furniture items. Flights between Apia and Auckland are another addition to the basket of good and services. Also included now are personal computers, digital TVs, and the costs of satellite TV: these items fall in the new division of Recreation and Culture. Weighting for Communication is also up. Although mobile phones were introduced in Tokelau in 2017, it is yet to early to determine the weighting of this item and hence its impact on the CPI. This will be considered during the next review.

Note that Health (Division 06) and Education (Division 10) are free, and there is no significant expenditure on Restaurants or Hotels (Division 11) by consumers in Tokelau. The tropical, non-self-governing territory of New Zealand uses the NZ dollar as its currency. Most goods are imported by boat from the nearest port, Apia in Samoa, which lies about 500 km to the south in the Pacific.

Refer to the Tokelau CPI page for more details: http://tinyurl.com/TokelauCPI