The quarterly consumer price index (CPI) of Tokelau is on the rise this year, with an increase of 0.4 percent (revised) for the March 2017 quarter, 1.6 percent for the June quarter, and 5.8 percent for the September quarter. The Tokelau National Statistics Office released these figures today.

The highest contribution to CPI came from the group Alcoholic beverages and tobacco in June and September: 1.3 and 3.3 percent respectively. This is the result of a policy to increase the price of cigarettes by 46 percent, to discourage smoking (from NZ$6.75 on average throughout 2016, to $9.60 for a packet of 20, upon completing the implementation). 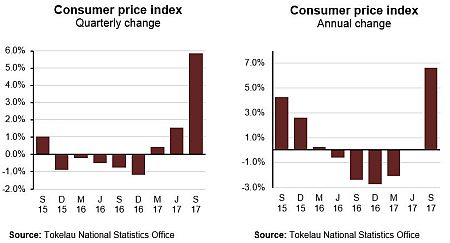 In the entire year to the March, June and September 2017 quarters, the CPI of Tokelau fell 2.1 percent (revised), then showed no change, then rose 6.6 percent, respectively.

The main upward group contributions came from the Transport group: up 5.3, 5.7 and 1.4 percent; and the Alcoholic beverages and tobacco: up 0.3, 5.1 and 19 percent in the year to March, June and September quarters, respectively.

The largest downward contribution to the annual decrease came from Internet prices which fell 45 percent in December 2016, leading to a 23 percent drop in prices within the overall Communication group. Prices in the Furnishings, household equipment and routine household maintenance group also dropped considerably (down 14 (revised), 14 and 8.9 percent respectively in the year to March, June and September quarters).

The present data are a result of revising our CPI basket of goods and services that will better reflect current consumer spending. It is based on the 2015/16 Household Income and Expenditure Survey (HIES) in Tokelau, and revised the initial basket from June 2012. In addition to selected items available from the cooperative stores on the atolls, it now also incorporates the cost of a return flight Apia-Auckland, and a few appliances and furniture items available from Apia. All items are weighted by relative importance based on the HIES.

The full information release on the Tokelau CPI, including tables and technical notes,  are available from http://tinyurl.com/TokelauCPI
[Ends]