The Tokelau National Statistics Office (TNSO) has released the country’s Gross Domestic Product (GDP) figure for the first time. For the 2015/16 Financial Year (July-June), it was determined to be NZD14 million, which equates to USD6,275 per capita. The tiny New Zealand non-self governing territory Tokelau, situated about 500 km north of Samoa, counts 1,499 people.

Given the importance of GDP, most countries calculate this economic indicator at least annually, if not quarterly. Until now, for Tokelau the only formal GDP estimate had been made around 1990; unfortunately that value remains quoted widely to this day (in Wikipedia, for example, from the CIA World Factbook 1993).
The GDP calculation was to a great extent informed by the Household Income and Expenditure Survey (HIES), that was conducted in Tokelau for the first time between May 2015 and February 2016. This had been done with the assistance of experts from the Pacific Community (SPC) based in Noumea, New Caledonia. Another valuable resource was the Consumer Price Index (CPI) that the TNSO has produced and published quarterly since June 2012.

GDP is an accurate indication of an economy's size; it provides a good first approximation of well-being of a country for comparison internationally and over time. The GDP growth rate is probably the best indicator of economic growth. Expressed in American dollars (USD), GDP per capita provides a useful comparison of living standards in similar, such as developing, countries.

Among the members states of the Pacific Community, the Tokelau value of USD6,275 for 2015/16 is roughly 1.5 times the per capita GDP of Samoa, Fiji, Marshall Islands, Tonga, and Tuvalu; but less than half that of American Samoa, Nauru, Niue, Northern Marianas, Paulau, and Wallis & Futuna. It is way less than that of Cook Islands, Guam, New Caledonia, and French Polynesia. Per capita GDP in Kiribati, Papua New Guinea, Solomon Islands, and Vanuatu lies well below the Tokelau value (data from the SPC 2015 Pocket Statistical Summary).

Per capita GDP indicates how living standards develop over time. However it does not address other important aspects of quality of life, such as quality of the environment, safety, life expectancy, population literacy, gender equality, poverty or disparity in income/expenditure.

Some of such variables have for the first time been addressed in Tokelau’s 5-yearly Census of Dwellings and Population, held on 18 October 2016. This Census was done again with the assistance of Statistics New Zealand (SNZ) in Wellington. Detailed results are on the Tokelau Statistics website, with more publications to be made available there soon: find it at http://TokelauNSO.tk 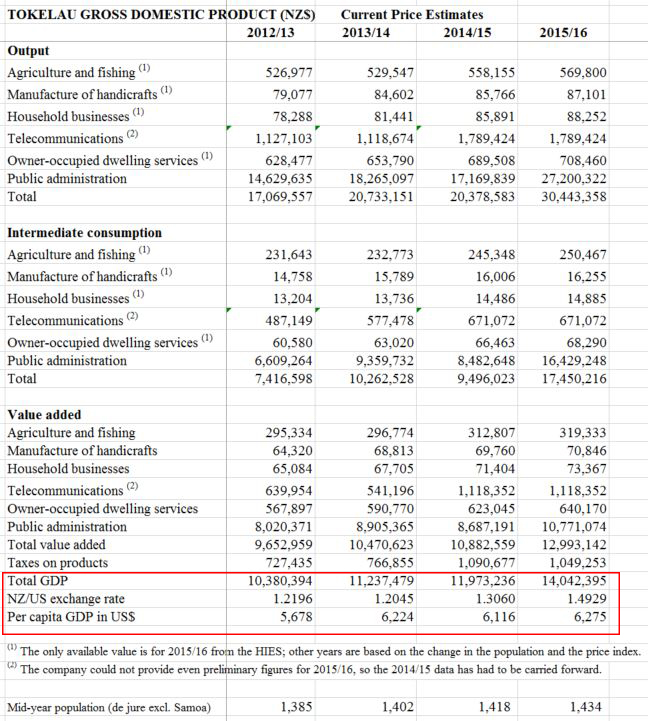